Imagine trying to drive with a blindfold over your eyes. You would probably never attempt it. However, driving in fog can be almost as bad as operating a vehicle without the ability to see. The eyes are crucial for detecting what is ahead, to the sides and behind the vehicle and thus avoiding accidents. Visibility in thick fog can make operating a vehicle extremely dangerous, but drivers can take steps to try to reduce the problems associated with driving in this kind of weather.

If asked to name the most dangerous conditions for driving, many people would likely think of blizzards or of driving on the thin, almost invisible layer of frozen moisture called black ice. However, as the Defensive Driving website notes, fog is one of the most dangerous weather conditions. If possible, people should choose not to drive in it. As fog is usually the thickest at night or in the early morning before it dissipates, drivers should try to delay their trips rather than starting out in foggy conditions.

Essentially, operating a vehicle in fog is like driving through a cloud. Fog, like a cloud, consists of water droplets suspended in the air, where they usually remain until the sun burns them off. Fog tends to be more common in cool but relatively mild weather conditions, such as in late fall or early spring, but it can occur at almost any time of the year.

Fog can consist of a light mist that barely obscures visibility, but it can also be so thick that people can barely see a metre or two in front of them. In that case, the best option is to pull over to the side of the road or into a parking lot, turn on the vehicle’s four-way flashers and wait for visibility to improve. Unless the trip is extremely urgent, the dangers of driving in those hazardous conditions is far greater than the benefits of getting to work or school. 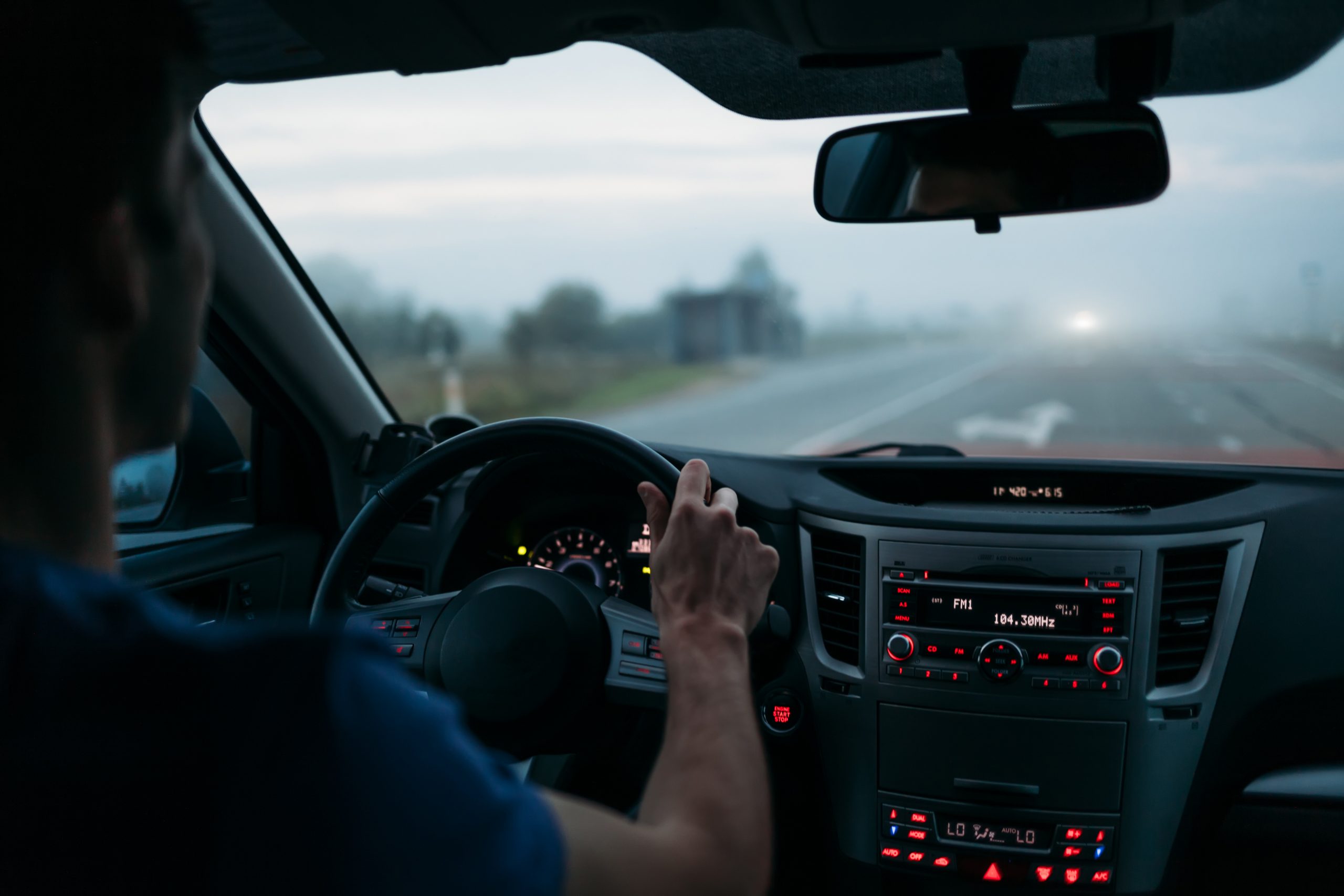 Sometimes, drivers may be obliged to drive in the fog, whether because of an emergency or because the fog that has come up unexpectedly in an area where it would be difficult to stop safely. Even when that happens, drivers can take steps to minimize the dangers. If it is absolutely necessary to continue driving, vehicle operators can take a few precautions to reduce the hazards.

The online Driver’s Handbook of the Government of Ontario suggests several methods of managing a vehicle in foggy conditions. Drivers should slow down gradually until they reach a safe speed and avoid changing lanes or passing other vehicles if possible. Leaving extra space between vehicles is important for safety, since it can be more difficult to see what others are doing until it is too late.

Lighting is one of the most important factors for driving in fog because of the reduced visibility in those weather conditions. Drivers should be sure to use all of their available lights, including fog lights if the vehicle is equipped with them. Using low-beam headlights is best, as the light from high beams can reflect off of the moisture droplets in the fog and reduce visibility.

Knowing where to drive is an issue in thick fog. In conditions where it is difficult to see any surroundings, drivers should use the markings on the pavement as guides for where to drive. Watching the tail lights of the vehicle ahead is also an option, but doing so might create problems. As the Autofile website notes, following another vehicle can result in a multi-vehicle accident if the first driver goes into the ditch or crashes into a stationary object like a telephone pole.

Drivers should be especially careful if fog occurs at night, as the reflection of street lights and headlights can create a glare and temporarily blind drivers. Having properly functioning tail lights is essential, and drivers should always be sure that their vehicles are as visible as possible. While this is important for all drivers, regardless of where they live, it is especially important in areas that are prone to frequent foggy weather. Clear windows are also essential, as any obstruction, including dirt and water, can decrease visibility even further. Using the intermittent wipers and turning on the window defroster can help improve the driver’s ability to see as clearly as the conditions allow.

Variability and Types of Fog

Like many other weather conditions, fog can vary widely, even in a short distance. Drivers might see what appears to be the fog lifting, only to find that they are back in thick fog with greatly reduced visibility. Instead of speeding up and trying to return to normal driving too quickly, drivers should continue to exercise caution until they are sure that the fog has lifted. 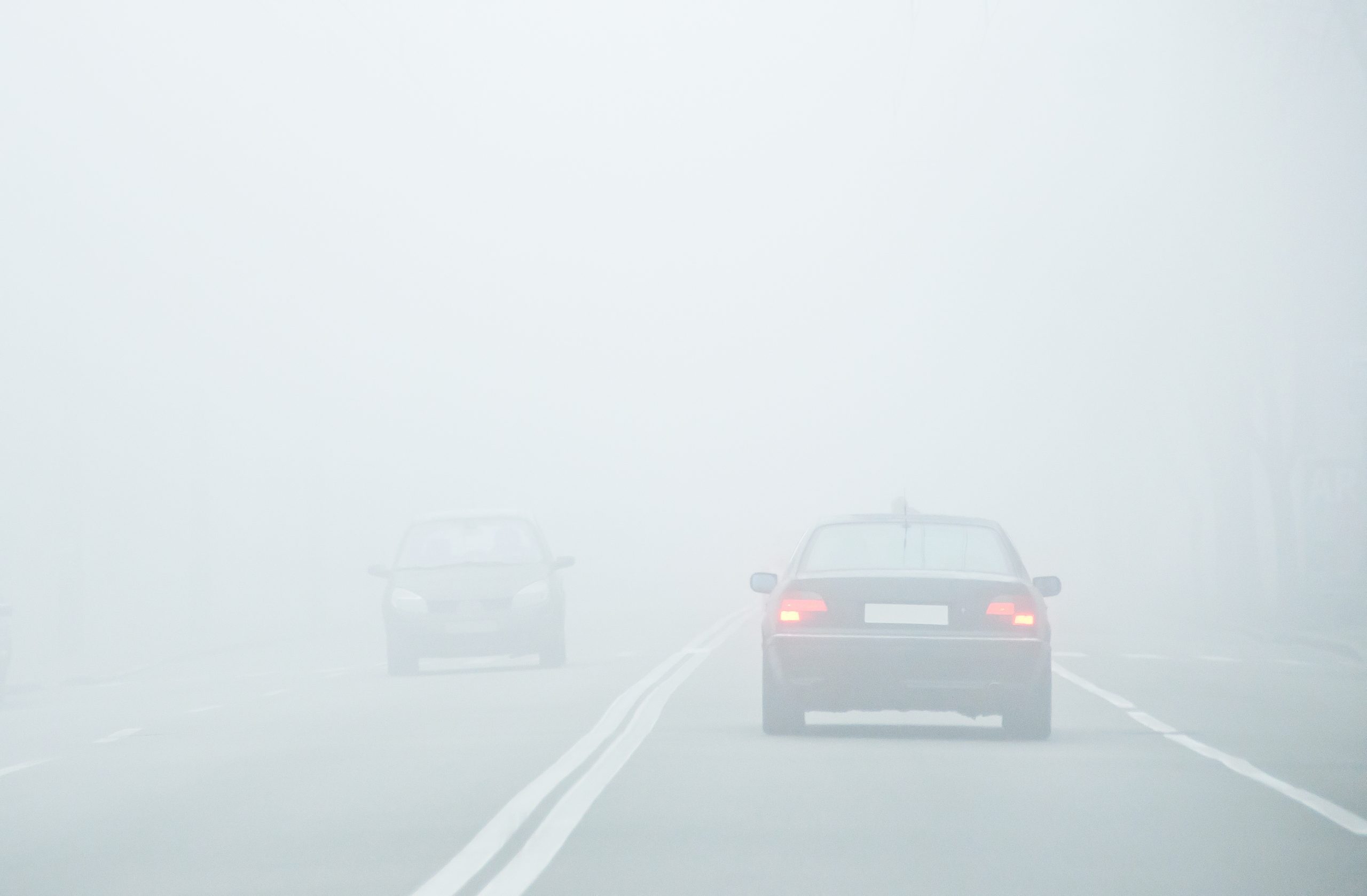 As with all other road conditions, drivers should be aware of the effects of the environment on the weather. Different types of fog tend to occur in different areas. As the National Geographic online encyclopedia entry on fog explains, radiation fog results from the earth’s heat rising into the air. This type of fog normally happens in the evening or at night. Advection fog happens when warm, moist air passes over a cool surface, especially in warm places like California, but also elsewhere. Valley fog normally occurs in the valleys between mountains, when air becomes trapped, usually in the winter. Freezing fog often happens on mountaintops and leaves a layer of frost behind it.

Although the average driver is unlikely to experience all of these weather conditions, it is important to be aware of the potential dangers of each type of fog. Going around curves or over hills can be especially hazardous, as these areas can already have reduced visibility due to the terrain. Sometimes, fog can also combine with icy roads to make the conditions even more treacherous.

Road users cannot control the weather, but they can try to adapt their driving techniques to the conditions. Driving in the fog takes extra care, but drivers can learn to deal with this very dangerous weather condition.