No one wants to be in an accident, but it can be reassuring to know that safety devices like airbags can reduce injuries. A bag filled with air might seem like an odd life-saving device, but airbags can be useful for helping to prevent injuries. Although they have limitations that may cause some concern for drivers and their passengers, airbags are a useful part of any vehicle’s safety system. All vehicle users should know the proper methods of taking advantage of these devices in case of an accident.

In road accidents, airbags can help save lives and prevent injuries. According to Transport Canada, airbags helped prevent about three hundred deaths over a ten-year period. In addition, a U.S. National Highway Traffic Safety Administration study has found that, together with seat belts, airbags can help reduce injuries up to 75 percent, especially for the head and chest. As these areas of the body contain the brain, lungs, and heart, the most important organs necessary for life, protecting them is essential. 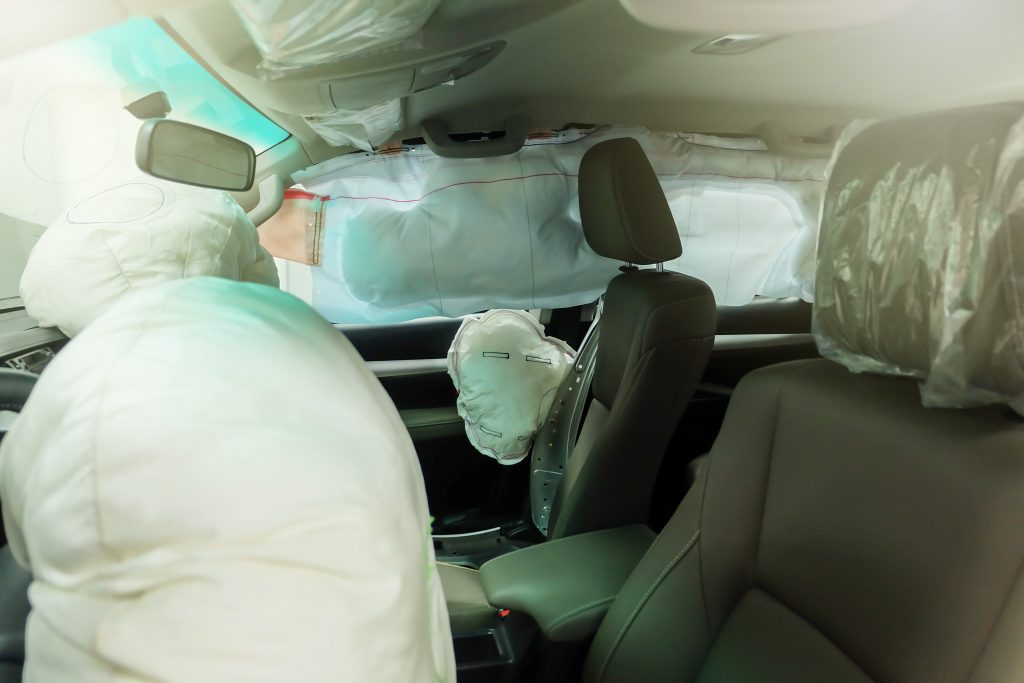 As the Driving.ca website explains, most vehicles now come with at least two airbags, one set in the steering wheel for the driver, and the other in the dashboard on the passenger’s side. However, many vehicles also have several others, including one in each of the front doors, and sometimes beside the rear seats, as well. One might be under the dashboard and others in front of the seat cushions. Some models of vehicle even have an airbag in the front between the driver and passenger. Each one has a specific purpose for keeping the occupants safe.

The website of the Canadian Association of Road Safety Professionals notes that front airbags are designed to keep the head and chest from contact with the steering wheel or dashboard. All vehicles have sensors that detect sudden changes in the speed of the vehicle, such as when the driver applies the brake or when the car, truck, or van collides with a hard surface, such as a wall or another vehicle. In severe crashes, the computer sends a message to the airbags to deploy.

The speed at which the vehicle is going is only one of the factors that determine airbag deployment. The severity of the crash is an aspect, and the system uses several other criteria to gauge the potential need for the airbag. When the crash is severe enough, a chemical propellant is ignited, creating a gas that inflates the airbag. All of this happens almost instantaneously. Often the occupants of the vehicle will see a fine mist in the air after the airbag deploys and may think that the vehicle is on fire. However, this is just talcum powder, which manufacturers sprinkle on the bag to make the unfolding process smooth as the bag inflates. 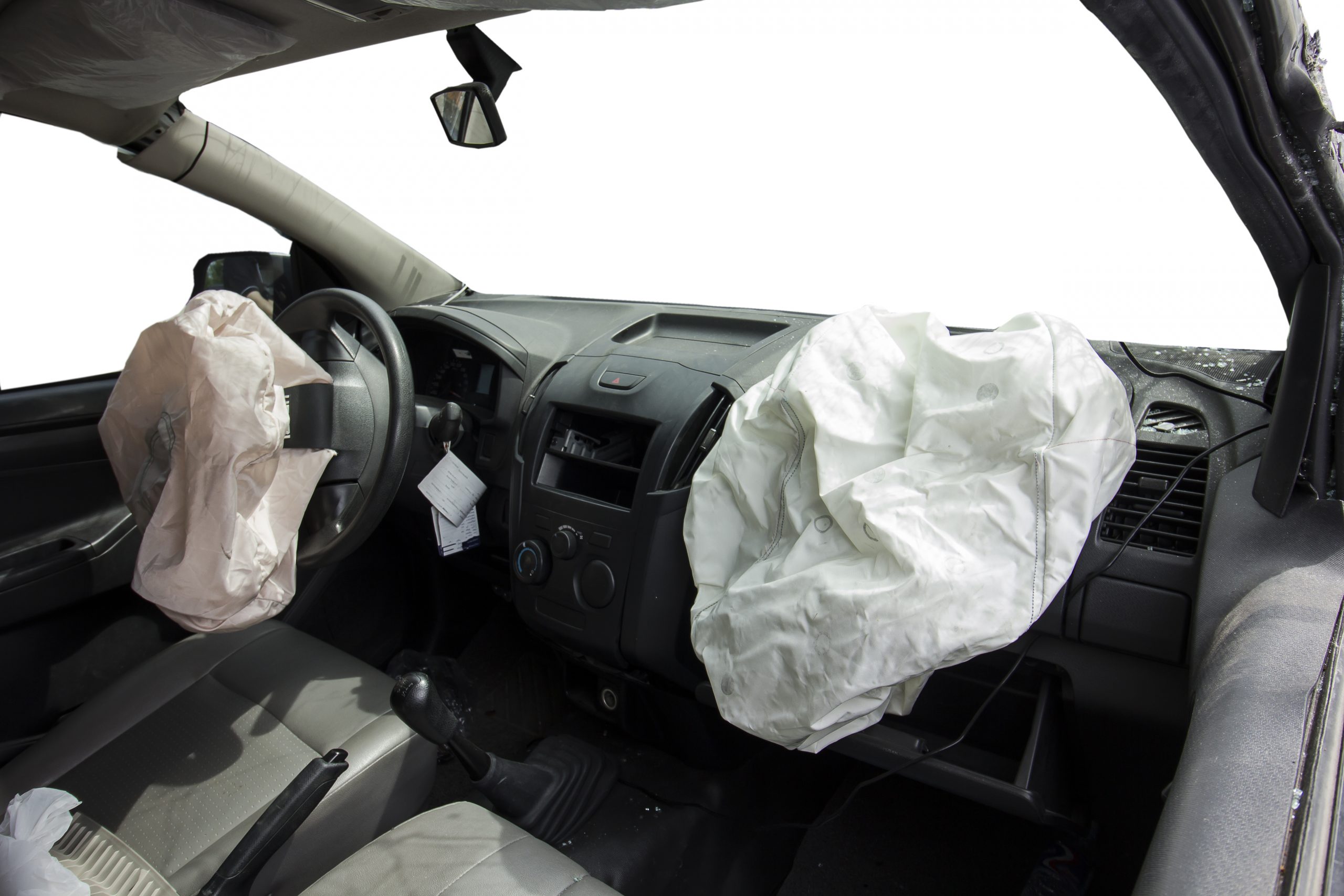 Airbags are designed to work without any need for action from the driver or passenger. However, people need to know how to use these safety devices effectively. Although they are designed to help keep people safe, these devices can cause injuries such as broken ribs or arms. Often, these injuries happen because the person is sitting too close to the airbag when it inflates.

As the Driving.ca website states, the vehicle occupants should sit at least twenty-five centimetres away from the airbag to avoid being injured in case of an accident. This measurement refers to the person’s body, not including bulky winter clothing. Even for very tall people who sit far back from the steering wheel, the airbags can be effective.

Proper steering wheel use can also help to reduce injuries if the airbag inflates. The quick inflation of the airbag could easily break an arm or wrist, but if drivers maintain the 9 o’clock and 3 o’clock positions on the steering wheel, they can keep these vulnerable body parts out of danger. Other than a few cases of broken limbs, the most common injuries are abrasions and other minor consequences.

Some people may object to airbags due to the possibility of being killed by these safety devices, and it can be a valid concern. However, Transport Canada notes that despite some fatalities, these devices in general are more helpful than harmful. In some cases, vehicle owners may receive permission to turn their airbags off, at least temporarily. In that case, mechanics can install an on/off switch to allow drivers to choose when to allow their airbags to function.

Vehicle owners must have a valid reason for deactivating their airbags. For example, if the driver has no choice but to transport a child under the age of twelve in the front, especially an infant in a rear-facing infant seat, the airbag should not be on due to the risk of injuring the child. In addition, drivers can disconnect the airbag if they are physically unable to keep at least twenty-five centimetres between themselves and the centre of the steering wheel or who have a medical condition which makes the airbag more dangerous than an accident would be.

Despite these exceptions, it is better in general to keep the airbags activated and rather to fix any other issues if possible. For example, fixing or reinstalling working seat belts in the back seat could remedy the situation of having young children riding in the front, while drivers can also monitor their health situation to be sure that they return to using airbags as soon as they can.

Even when it is necessary to deactivate the airbags, drivers should ensure that these devices can be turned back on if necessary. For example, if the driver sells the vehicle or lends it to someone else, the second driver should be able to reactivate the system easily. Drivers should also be able to provide proof, such as a doctor’s note, to show that the deactivation was necessary.

Airbags might seem unnecessary until an accident happens, but these devices are useful for saving lives and preventing serious injuries. Knowing how to get the best effect from them is helpful for every driver.