Years ago, life moved at a slower pace than now, and people could take their time in getting to their destination. The poor conditions of the roads and a lack of tight deadlines meant that people would generally be able to travel slowly, taking the best and safest route instead of the fastest one. Times have changed and people now sometimes need to take detours and shortcuts. Still, drivers should be aware of the issues and pitfalls involved in straying from the official route, whether to save time or to avoid a barrier in their way.

Delays on the road can be frustrating. Construction or accidents can block several lanes on a road, or traffic can make it difficult for drivers to get to their destinations. When that happens, many people look for other ways through to where they want to go. Official detours or unofficial shortcuts can make driving faster and possibly less frustrating, but drivers need to be aware of the issues with leaving their route for another road.

Sometimes, drivers have no choice about taking a detour. An accident on the street, fallen rocks in the mountains, a washed out the road, or construction often means that the police or traffic authority will set up an official detour that drivers should follow to avoid the obstruction. In this case, the route is normally well marked with arrows and signs instructing drivers about what to do. A worker may also stand at the side of the road to give verbal instructions to any drivers who come along. Sometimes, these detours are quite short, but they can also take drivers far out of their way.

Some detours are less effective than others. For example, a CBC article from June 2019 relates the story of a faulty Google Maps instruction which sent many drivers in the wrong direction en route to the airport in Denver, Colorado. Instead of instructing drivers on how to avoid construction along the route, the app sent almost one hundred vehicles to a muddy field where many of them got stuck. 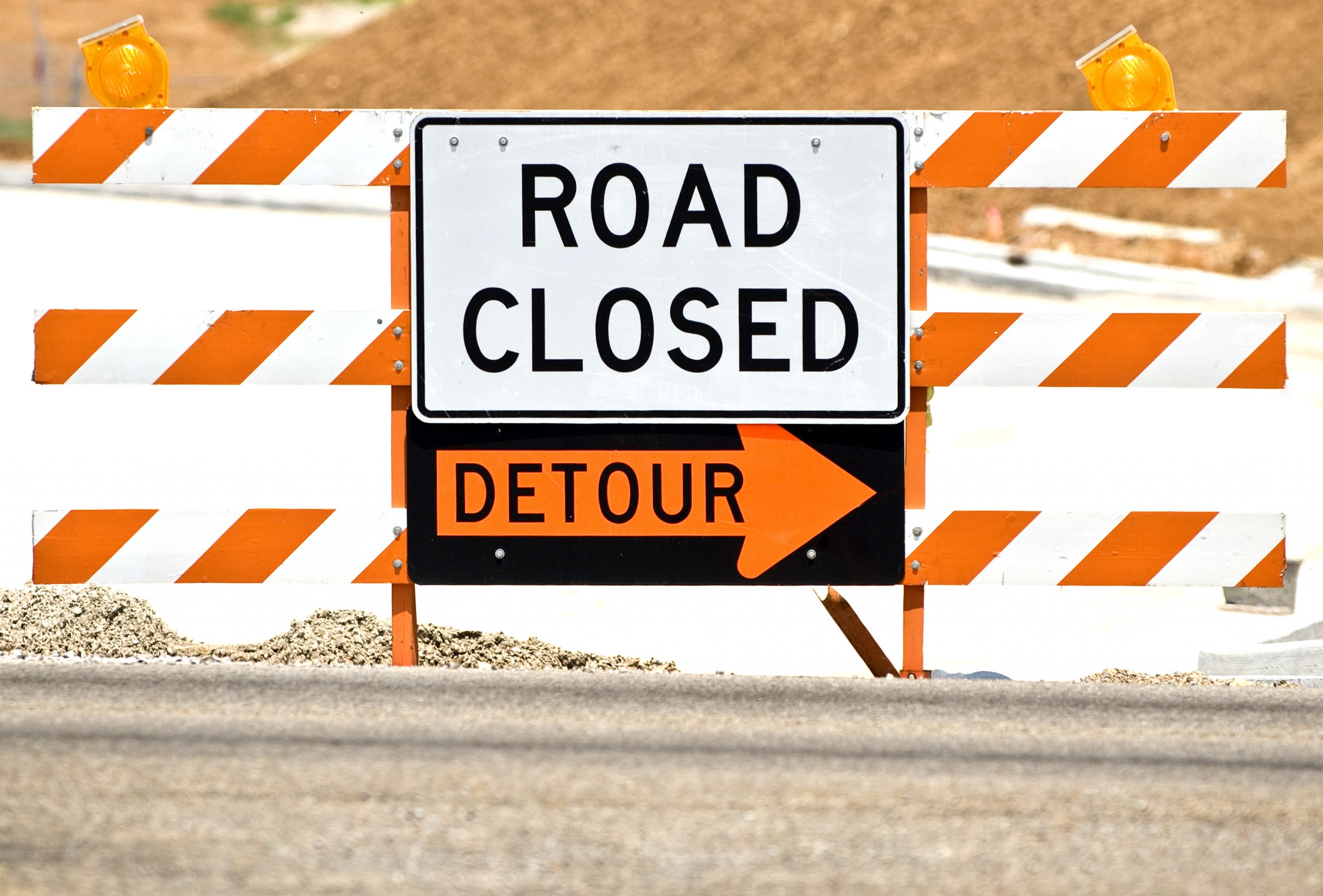 Unofficial detours can also cause problems for businesses. In a 2017 CBC article, Gail Harding describes the problems caused near Cornwall, Prince Edward Island, when drivers attempted to avoid construction on the TransCanada Highway by cutting through the parking lots of nearby businesses.

Many of the business owners were concerned that the extra traffic could be dangerous for customers coming to visit the businesses. Vehicles would be more likely to collide with each other when some drivers were looking for parking spots while others were just looking for the quickest way through, and pedestrians were at greater risk as they walked between their vehicles and the businesses.

The same kind of issue can apply even without obstructions like construction or traffic jams. A 2019 CTV article by Sarah Reid tells of the actions that the staff of the Juan de Fuca recreation centre on Vancouver Island took to stop drivers from going straight through the parking lot. So many drivers had been using the parking lot as a shortcut to Old Island Highway that the recreation centre’s staff closed one of the exits to the parking lot to keep people from cutting through.

Not all shortcuts are bad. If they can save time without intruding on private property or causing other problems, they can be useful. Still, drivers should be careful about the routes they choose. Taking a shortcut through a school zone, for example, could put children in danger from the increased traffic. Going through residential areas or even through certain business areas could also cause problems for pedestrians and others attempting to go about their daily routines. If you find a shortcut that you think might help you, be sure that it does not hamper daily life in the area.

Detours, even if they are official routes around an obstruction, can have some of the same issues. Traffic officials may be forced to reroute traffic temporarily through heavily populated areas, but when the main route is cleared, traffic should normally return there.

Drivers can still use these alternate routes when it is appropriate, but they should be conscious of the local residents and what their schedules are likely to be. In addition to school zones, drivers should be especially aware of playgrounds, shopping malls, bike routes, and anything else that might bring people out onto the roads.

Bicycle routes are an important consideration. In many cities and towns, official bicycle paths, whether they are protected or are integrated into the street, give cyclists a chance to ride their machines without being crowded by vehicles driving in the same lane. Bicycle routes are somewhat different in that the road is not divided into separate sections for motorized and non-motorized vehicles, but they are generally quiet streets where cyclists can anticipate a reasonably quiet and safe ride. Drivers are expected to give precedence to cyclists on these roads.

Although vehicles are normally allowed on streets designated as bicycle routes, at least for a short distance, drivers should be aware that these streets are intended to be quiet and relatively car-free. While they can be part of a temporary detour, they should not become a long-term solution for a speedy route around heavy traffic.

When drivers take detours and shortcuts, the temptation to take unnecessary risks is often high. People want to get to their destination quickly or to get back to the main road, and they may feel that going over the speed limit is necessary. However, these situations still require drivers to obey the rules and to be careful on the streets. Cutting through back alleys or going the wrong way down a one-way street, however briefly, may put the driver and other road users in danger. Any shortcut or unofficial detour should involve only legal maneuvres that are safe for everyone on the road.

Shortcuts and detours are common on roads across Canada, but drivers need to be aware of the possible dangers for themselves and other road users. Everyone’s safety depends on it.